What a wonderful weekend I had!!  I just spent 2 weeks scrambling and creating, getting ready for my first ever Craft Sale in my home.  It was a great success due to the awesome vendors (talented friends) that agreed to bring their creations to the house and sell them over the weekend.   The house was packed nearly NON STOP and many mentioned that this was a better showing than the 36th(?) annual CSI Craft Fair with a hundred vendors...and that our prices were very reasonable.  THANK YOU...what a wonderful compliment:) 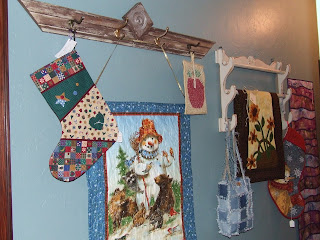 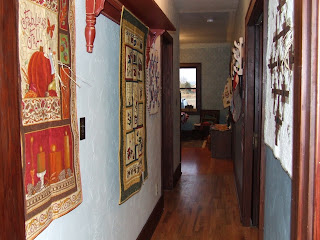 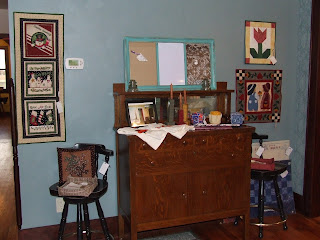 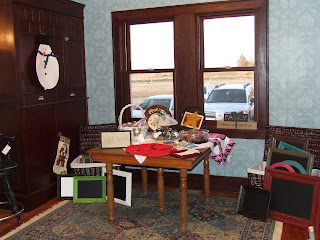 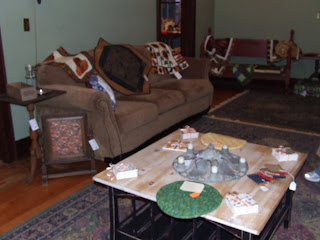 As you can see from the above photos, my friends are mainly sewing experts and quilters.  Something that is very foreign to me, but its a complimentary talent when assembling a craft show around my mostly wooden creations.  The house was so jam packed with fabric items that my walls and furniture were COVERED!  By the end of the first day of the show about half of the sewn treasures had been purchased however many of my large pieces were still in place.  After spending a few minutes in the evening visualizing my items being purchased and headed out the door and down the road, I was ready for day two.  Now I don't know if it was my visualizing, or the fact that there was less to choose from, but my bigger items did finally make their way out the door and to a new home!  Which made me very happy.  So thank you to all that came out and supported us, and hopefully we will see you next year!
Here is a sample of some the coat racks, towel racks, wine racks, key racks, pot racks and just general storage items I made for the weekend.  I dug around in my storage shed and pulled out all the bead board and barn wood (well...actually it was wood from a demolished outhouse!) and got my brain creating!  As you can see, I throw NOTHING away.   You just never know when you might need it:) 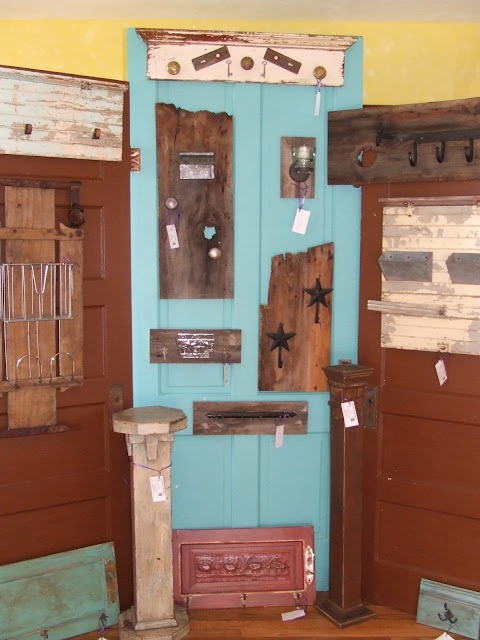 Speaking of beadboard, these tables are made from 2 bathroom stall doors that I found in my stash! 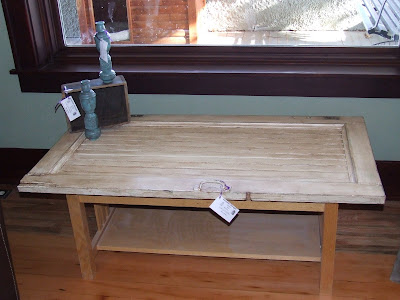 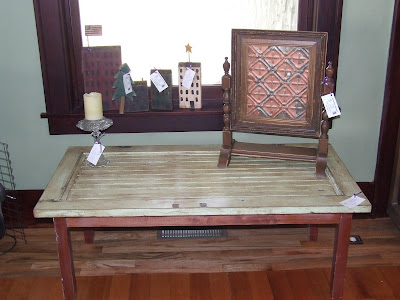 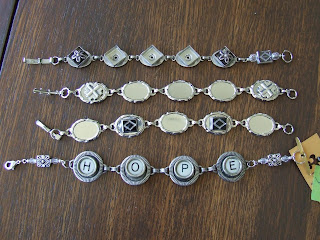 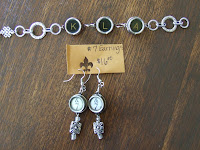 Here are some of my FAVORITE items that SOLD this year: 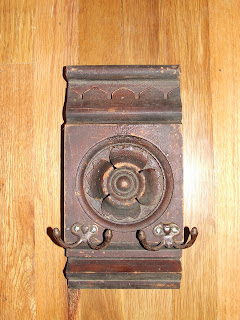 The BEST part of the whole weekend was being able to pass on a family heirloom...hee hee...to a great grandson!!  I had hung the monogramed shower door of the previous owners on the wall and was trying to find a  Marshall family member to give it to.  Becky and Ben showed up and now it is in the right hands, to be passed on for generations!  How cool would it be to say "I have my great grandpa's monogramed shower door!" 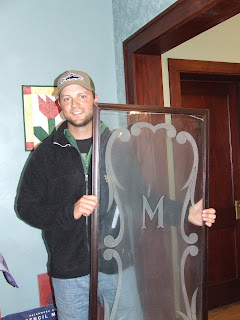 Enjoy it BEN!
Kelly
Posted by Kelly at 7:12 PM No comments:

This spacious room had ceiling to floor and wall to wall drapes, as did most of the rooms, but there was something hidden in this room.  Something some of the grand kids didn't even know was there, and something we uncovered within the walls.  Come along on the adventure to find out what it was hiding behind those Hawaiian print drapes and lurking within the walls. 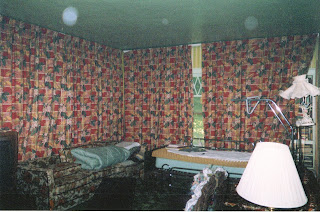 This room had several layers of wallpaper as seen below.  The first thing I did was take down the drapes.  Believe it or not the red flower wallpaper pictured below is actually a match to these drapes!!!  The wallpaper that was up with these lovelies was the yellow and green stripes.  Next I pulled down the top layer of paper to reveal the apples.  It helped to rid the room of the musty OLD odor it had, but I dug deeper.  I was on a mission to discover the history of the home.  I saved a sample of EVERY layer of paper from EVERY room.  My initial intent was to make a collage for each room.  But after peeling back the layers I soon discovered this to be impossible due to the large patterns and almost mural like scenes.  These are the layers from the living room.


There were 9 layers of paper on the staircase walls which is located just south of the living room.  I soon discovered these layers provided a nice insulation!      These are the layers found under the stripes and apples.

Now the REAL work on the living room started when I was away at a friend's house celebrating New Year's Eve.  I THOUGHT I was going to come home to some work COMPLETED on the bathroom, BUT this is what greeted me!  The plaster was all down from the ceiling and walls of the living room.

When the time came, Wayne had a little help hanging the new sheet rock.  Because I could not get all the wallpaper off and we did not want to disturb the base boards, we covered the concrete walls with 1/4 inch sheet rock.  We were able to set it on the baseboard and glue it to the wall.  That helped to provide a little bit of that insulation factor we lost with the peeling of the paper. 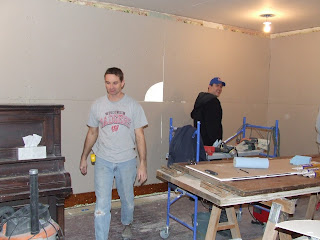 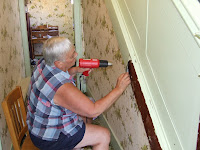 My sister Nancy flew out about a month after we moved into the house.  I put her to work on the staircase stripping 5 layers of paint.  This was one of the first jobs we tackled, and it was the LAST to be completed 5 years later.  What a long drawn out process it is to strip paint from antique molding!﻿
﻿﻿
﻿ 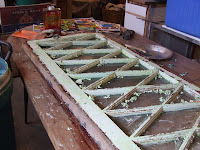 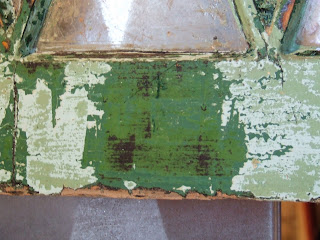 Now... the finished product!  After 5 years of stripping several layers of paint from the woodwork, it has now been restored to its 1916 glory and the diamond windows have been hung back in their proper place.  Notice the built in bookcase to the right.  It had been covered for decades under the drapes and it was a surprise to some family members to see it existed!  As I worked on the restoration of the built in I discovered photos of the Marshall family, as well as the Atwoods who were the original owners, that had fallen through some cracks and found their way UNDER the bookcase.  There were also several Christmas cards addressed to the Atwood's from the late 1920's and early 1930's there as well. 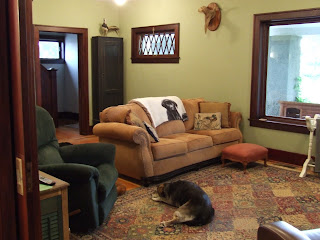 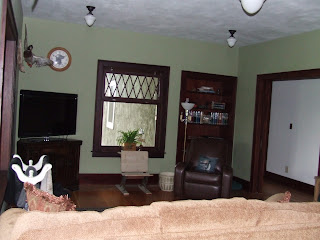 Here is a view of the living room looking into the dining room and mud room at the back door.  We tried to keep the home as true to it's original construction as possible, but with several additions that took place in the 40's, 50's and 80's it was hard.  I hope we did it justice and that THIS old house will be around for another 100 years!

Kelly
Posted by Kelly at 2:23 PM No comments:

Kelly
Everyone knows I have a passion for old houses and a serious need to save the doors, windows, claw feet, tin ceiling tiles, old house parts in general…AND I have a FULL barn to prove it. I salvage all kinds of things and turn them into something new and useful. Thanks for checking out my blog.